Subscribing and Connecting to Delightability Musings
Greetings Global Citizens,
I'm sharing this post here on fordoers blog as well. I recently changed the blog subscription service for the Delightability blog from feedburner to Jetpack. That is a bunch of blah blah for most of you. You don't really need the details but, what this does mean is that if you previously subscribed, you'll need to re-subscribe. I apologize for the inconvenience foisted upon me by the gods of technology.
To Subscribe visit the Delightability Blog (opens in new window).
Why Subscribe? In my blog posts I aim to make us all a little smarter, more thoughtful, and more productive. I hope that each post has a multiplier effect, on you initially and then in turn on others you share with.
What Subscribing Will Mean for You. Wondering how many emails you get when you subscribe? Great question. My goal is to blog weekly. I don't always make that goal and sometimes I exceed it. When you confirm your subscription you can create the frequency to match what you want e.g., immediately, weekly, etc. Fortnights and blue moons are not yet part of the mix.
Rather not clutter your email? I understand. I'll continue to provide links to posts as they occur on social media, but that isn't a guarantee you'll receive them. After all, the drive of many social networks is toward favoring paid and promoted content or that which is created directly within their platform, in essence digital sharecropping.
Connecting on Social Media. Here is where to find me on social media should you wish to connect, friend, follow, etc. Clicking each will open in a new window.
Twitter
Facebook
LinkedIn
Google Plus
about.me
Recent Blog Posts:
Here are the last few blogs posts. If you especially enjoy an article, please share it with others, tweet it, or like it on facebook.
Subscribe if you like. If not, I'll occasionally see you out and about in the social universe. Thank you for reading and sharing and being a better global citizen.
Kind Regards, Gregory Olson is a consultant, speaker, and author. His upcoming book is l’ impossi preneurs: A Hopeful Journey Through Tomorrow.
Greg also authored, The Experience Design Blueprint, a book about designing better experiences and then making them come true. The models in the Experience Design BLUEPRINT are equally relevant to organizations of all types and sizes including start-up entrepreneurs, nonprofi ts, for-profi ts, and government.
See a book summary. Read the book reviews on Amazon. Read The Experience Design Blueprint on Kindle or any device using the free Kindle Reader application or read the full color print edition.
Posted by Grego at 7:59 PM No comments:

Share the Big Picture to have More Productive Conversations 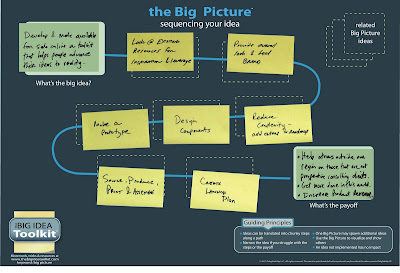 It is really hard for a team to move forward when they are not on the same page.

Too many of our conversations are not productive. In the best of cases we sometimes simply don't understand what others do. Our biases and experiences are different. We don't see things the same way. On our shared projects, we end up being late, re-understanding, redoing, or sometimes we just simply miss the mark. But, in the worst of cases, "team" members politely nod in agreement or silently dissent then leave the meeting without any intention of following through. In either case, the effects are the same, we execute poorly on something that wasn't understood or agreed upon.

Turns out there are a couple of easy solutions. One is to make sure the team understands and agrees to the Big Picture. As John Medina writes in Brain Rules, "Vision trumps all other senses," so make this visual. Use the Big Picture poster from the Big Idea Toolkit or something similar. I like the toolkit because it uses sticky notes and all people can participate in content creation and then rearrange the pieces as necessary. The big idea is communicated as well as the results expected, "what is the payoff."

You still need to create action triggers, define deliverables and owners but that is the subject of the PlayBook and another post.

Now go and there and get something done. But, please have the Big Picture so you can work smarter whether you are working by yourself or with a team.
Posted by Grego at 10:12 AM No comments:

The Wall from Gregory Olson View more presentations from Greg Olson.
Posted by Grego at 5:07 PM No comments:

Perfect Gift for Senior Executives - Execution in a Box! 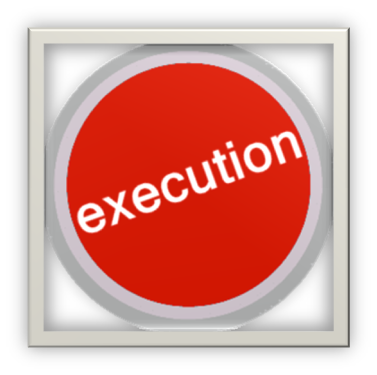 Silly rabbit – execution doesn’t come in a box but if it did many CEOs would sleep better at night. According to a global survey of chief executives by The Conference Board, when asked to rate their greatest concerns from among 94 challenges, the sample of CEOs chose excellence of execution as their top challenge for the second year in a row. http://www.conference-board.org

So why is execution so difficult? Many excellent book have been written on the subject. My favorite is Execution – The Discipline of Getting Things Done by Larry Bossidy and Ram Charan. Here is another perspective with 3 simple dimensions to think of namely, people, process, and technology. In this first part I’ll cover the people aspect of Why Execution is so hard.

Apathy
In many corporate environments today apathy has set in. Commonplace layoffs and compensation practices haven’t helped to build great company cultures. Where are the $1 dollar a year CEOs? The difference in pay between the top and the bottom of organization is wider than ever. When employees are already “at capacity” due to previous cuts and have absorbed the jobs of those who were let go, then those that remain grow weary of what’s next. Making matter worse, when executives remove themselves from the operational reality then a semi-silent attitude persists around watercoolers and in instant messages, “let mahogany row do it” “They decided on x and then let Mary, Rob, and Bill go, so let them do it themselves”. Warning to leadership everywhere - If you cut deeply and don’t temper your ambitions your staff will temper it for you during the execution phase of your great strategy.

Butt toward customer
When organizations are not rooted in customer reality, understanding who ultimately creates demand for their products, then organizational bias’ can creep in and cause each department to imagine who the customers are. Along with this comes the finger pointing and blame game when things don’t go well. Unfortunately, this lack of alignment gives birth to micro strategies as each department crafts their own, sometimes silently. As said in Funky Business, when you have your focus inside the organization you have your butt toward the customer. That is not a great experience for your customers.

Lack of intellectual honesty and authentic dialogue
A company culture that lacks execution probably is absent of intellectually honesty and authentic dialogue. Execution gaps are ignored, corners are cut, and alarming messages are filtered. Pressures within companies to conform work the same whether the culture is one that executes well or one that executes poorly. Homogeneous lemming-like thinking sets in. Rock stars are disillusioned and squelched. Like the Rush song, Subdivisions says,” conform or be cast out.”

Unpopular deeper thinking and healthy discourse are sometimes exactly the bitter pill a company must swallow to make it through challenging times and emerge a more healthy vibrant force. If you are a company leader, ask yourself what pill are you taking and more importantly what are your prescribing.
Posted by Grego at 9:02 AM No comments:

If the execution of your business strategy requires more than one person then you will need excellence in communications. Here are a couple of things to consider.

The CEO of a Major Distributor and a previous mentor of mine told me that whenever he was embarking on major change in his organization he knew he needed to communicate 50 times before people would fully embrace it. I would add that if they are sales people, you might need to communicate 55 times. Think about how many times you either communicate or receive communications at work. Start a counter or print the image above and cross off one "communicate" each time. I suspect your successful initiatives will reach 50 and those that fall short on execution don't measure up on the communicate counter.

Different People Require Different Modes of Communication
Some people love the face to face meeting while other abhor it. Younger workers can readily multitask, texting away on their phones, instant messaging on their computers, all the while working away on that spreadsheet or PowerPoint presentation. They might even look up to acknowledge you when you walk in their cube.

Other people have different communication preferences and habits. One consultant told me that she made people at a client company uncomfortable because she preferred to know who she was working with. She would show up at peoples offices or meet them for hall walks between meetings to put the name to the face. Recipients of her face-to-face meetings found this uncomfortable. They had a youthful highly technical culture that hid behind there computers and lacked emotion. This feeling was and is evident in this company's products today, something my colleague is hoping to change.

Different people have different communication defaults - phone, email, face-to-face, instant messaging, text, or telepathy. Problem is that these defaults are not always constructive for all contexts. For example, if you are having a misunderstanding (probably a miscommunication) with somebody, rather than sending yet another email, perhaps the best thing is to get out of your chair and have a face-to-face meeting. Know your default and change it up a bit from time to time. You will benefit yourself and those around you.

If you have a practical communication tip that helps with execution please comment or send me an email.
Posted by Grego at 6:48 AM 1 comment:

Grego
This blog served as my earlier thinking on the way to my writing The Experience Design Blueprint: Recipes for Creating Happier Customers and Healthier Organizations. See my more recent work at http://www.delightability.com
Older Posts Home
Subscribe to: Posts (Atom)